The Polybius Square is an ancient Greek invention, discovered by a scholar named Polybius. For the Greek alphabet of 24 letters, it consisted of a 5 by 5 grid where each square of the grid was filled by a single letter. In the English Alphabet of 26 letters, we have one too many letters. To get round this we combine two letters, traditionally "i" and "j". It is also possible to combine other pairs, such as "v" and "u". Another alternative to the Polybius Square for english is to include the digits 0-9, so we have 36 characters.
With the Square, we replace each letter with the two numbers that represent its position in the grid. We can choose whether we go across then down, or vice versa, as long as we keep it the same the whole way through. We shall go across first, so "h" is "32" in the standard table.
This encyrption is standard, and so far has no key, and thus is easily broken. We need to introduce the idea of a key to the Polybius Square to make it more secure (Kerckhoffs's Principle). This is done in a very simple way. We reorder the alphabet in the same way as we did for the Mixed Alphabet Cipher before we put it in the grid. That is, we use the letters of the keyword first, ignoring any repeat So using a keyword of polybius we get the mixed square below. 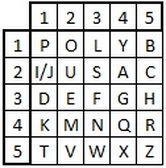 As an example, we shall encrypt the plaintext "nice and simple" with the keyword example.
With the Square complete, we simply find each plaintext letter in the grid, and replace it with its coordinates. So "n" becomes "53", "i" becomes "33", "c" becomes "32" and so on. Continuing like this we get the ciphertext "53333211 315342 443341511211".
Decryption
Decrytion is really easy too. We again make up the Mixed Square using the keyword, and then use the pairs of numbers to locate the plaintext letter in the grid, remembering the
We shall decrypt the message "42342115532354 23423241 23454224113123" using the keyword polybius.
Now we look at pairs of letters in turn. So "42" represents "a", "34" is the plaintext letter "n" and "21" is "o". Continuing in this way we get the plaintext message "another easy example".
Discussion
The Polybius Square was not originally intended as a cipher in its own right, but rather an aid to telegraphy. By using five different coloured flags (one to represent each of the digits 1-5) you could signal a message across a long distance easily, by holding two flags at a time. In this way, it is much like Morse Code, but much simpler to learn.
It has also been used as a "knock code" throughout history for prisoners to send messages to each other by knocking on the wall. It was used successfullly in this way by American prisoners of war in the Vietnam War, to talk to each other without detection.
As a cipher it is not particularly secure, even when using a keyword, since it is essentially a Monoalphabetic Substitution Cipher. That is, each plaintext letter is represented by the same pair of digits everytime, and thus an intercept is susceptible to Frequency Analysis. The analysis has to be done on pairs of numbers, but this is trivial to even an amateur cryptanalysist.
However, since each letter is represented by a digraph, the Polybius Square is a fractionating cipher, and as such can be used in conjunction with a transposition cipher to great effect. We shall see how this works later.
There are several ways we may choose to adapt the square itself. The first is the choice to combine "I" with "J" to make the letters fit. We could combine any other pair of letters in the same way. Care needs to be taken when decrypting the message to make sure we use the right letter, but this is obvious from the context of the rest of the word.
The second is that we could choose to read the "coordinates" down first and then across. This would reverse each pair on digits in the ciphertext, but works perfectly well, as long as sender and receiver do the same thing. You could make it a bit more complex by switching between the two methods after every letter, introducing a touch of a Polyalphabetic Cipher, and making frequency analysis more difficult.
The final way to adapt the Square is to use a different alphabet. Including the digits 0-9 gives an alphabet of length 36, so a 6 by 6 grid works perfectly (without combining any letters). You might also want to include some punctuation, and you would have to create a grid to fit the size of your alphabet. This could mean making a rectangular grid, or combining letters. 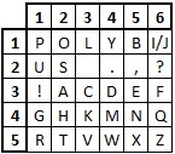 A Mixed Rectangle with keyword polybius and alphabet including a space, and a full stop, comma, question mark and exclamation mark