What is today known as the Vigenère Cipher was actually first described by Giovan Battista Bellaso in his 1553 book La cifra del. Sig. Giovan Battista Bellaso. However, in the 19th Century, it was misattributed to Blaise de Vigenère, who had presented a similar cipher (the Autokey Cipher) in 1586.
At the time, and for many centuries since its invention, the Vigenère Cipher was renowned for being a very secure cipher, and for a very long time it was believed to be unbreakable. It was this thought that earned it the nickname "le chiffre indéchiffrable" (French for "the unbreakable cipher"). Although this is not true (it was fully broken by Friedrich Kasiski in 1863), it is still a very secure cipher in terms of paper and pen methods, and is usable as a field cipher.
In essence, the Vigenère Cipher is an adaptation of the Trithemius Cipher, but instead of systematically progressing through the ciphertext alphabets in the Tabula Recta, it uses a keyword to pick which columns to use. 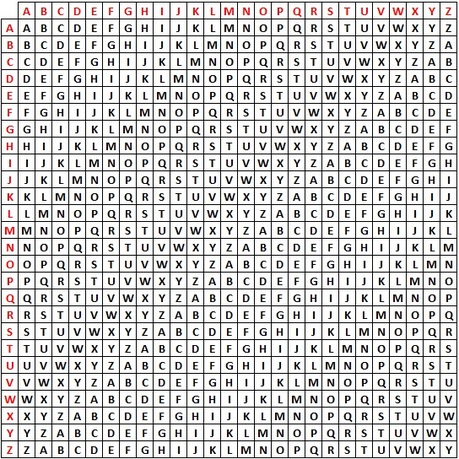 Tabula Recta
Encryption
To encrypt a message using the Vigenère Cipher you first need to choose a keyword (or keyphrase). You then repeat this keyword over and over until it is the same length as the plaintext. This is called the keystream.

Now for each plaintext letter, you find the letter down the left hand side of the tabula recta. You also take the corresponding letter from the keystream, and find this across the top of the tabula recta. Where these two lines cross in the table is the ciphertext letter you use.
As an example, we shall encrypt the plaintext "a simple example" using the keyword battista. First we must generate the keystream, by repeating the letters of the keyword until it is the same length as the plaintext.

The keystream generated using the keyword giovan.
Continuing in this way we retrieve the ciphertext "the unbreakable cipher".

The fully decrypted plaintext.
Discussion
The Vigenère Cipher was the biggest step in cryptography for over 1000 years. The idea of switching between ciphertext alphabets as you encrypt was revolutionary, and an idea that is still used to make ciphers more secure. One of the most famous examples of codes and ciphers in history, the ENIGMA machine, is just a modified polyalphabetic substitution cipher!
But why is the Vigenère Cipher so secure? What is it that makes this cipher better than the Mixed Alphabet Cipher? Let's take a look at an example. We shall encrypt the following text using the Mixed Alphabet Cipher and the Vigenère Cipher, both with the keyword encrypt.

Aged twenty six, Vigènere was sent to Rome on a diplomatic mission. It was here that he became acquainted with the writings of Alberti, Trithemius and Porta, and his interest in cryptography was ignited. For many years, cryptography was nothing more than a tool that helped him his diplomatic work, but at the age of thirty nine, Vigènere decided that he had amassed enough money to be able to abandon his career and concentrate on a life of study. It was only then that he began research into a new cipher.

Using the Mixed Alphabet we get:

And using the Vigenère we get:

The final distribution, for the Vigenère Cipher, is different to the others, and the distribution of letters is much more smoothed out. And even though there is a little bit of a peak at "G" (which we might think to be "e"), in the penultimate word "new" is "GIJ", so "G" is "n", but in the first word "aged" is "ETGU" so "G" is "e". This shows that the same letter can be achieved by different plaintext letters.
Although more difficult, it is not impossible to break the Vigenère Cipher (despite its nickname). In 1854 Charles Babbage cracked the Vigenère Cipher, but his work was not published in his lifetime. In fact it wasn't for over 100 years that his amazing discovery was found.
However, in 1863 Friedrich Kasiski independently broke the Vigenère Cipher and published his work. The method used to break it is called the Kasiski Examination in his honour, and relies on discovering a possible key length by looking for repeated patterns within the ciphertext. This is then used to split the ciphertext into sections, and perform frequency analysis on each of the parts that were encrypted using the same letter from the keyword. This weakness is due to the repeating nature of the keystream in the Vigenère Cipher, and this can be improved upon as we shall see.